Traveling is not a mere fact of visiting monuments and the historical heritage of the chosen destination, traveling is anxious to know a culture, to mix with its people, to enjoy its gastronomy, and to soak up its habits.

In Hostalin  we want you to know the real Barcelona. Barcelona is a melting pot of cultures. As such a capital, it is cosmopolitan and multiethnic. Its streets smell of Mediterranean food, meat, mozzarella, tartar, soy and curry. You will taste everything.

Prepare the bib, we start with a presentation of traditional Barcelona food. Keep in mind that talking about gastronomy in Barcelona is talking about Catalan cuisine. Land of sea and mountain, of orchard and rice paddies, of fishing and hunting, of cold and heat. In short, its cuisine is carefully prepared, healthy and very tasty. An authentic gift for the palate.

We know that for any traveler to understand the gastronomic specialties can be a challenge, especially because their dishes are named in Catalan. With this article, we clarify the most genuine specialties, worthy of tasting. If you want to immerse yourself in Barcelona, forget the tourist and commercial circuit, take out paper and take note of the TOP 5 in gastronomy typical from Barcelona. 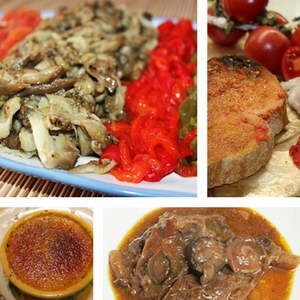 Born in 1884, in times of famine. The Catalans discovered a magic formula for eating hard bread. It consisted of taking the stale bread, cutting it into slices and spreading a tomato. Then, to soften it, they were generously watered with olive oil.

All local people, proudly, confess that this is one of the best inventions of Catalan gastronomy.

We eat it either at lunch, either at dinner. Actually, it is the best accompaniment for any meal.

The escalivada is a Mediterranean dish. It is a salad of eggplants, peppers, tomatoes, onions, salt, olive oil and vinegar. However, these vegetables are not served raw, but have previously been covered with a thin layer of fine olive oil and then baked. Delicious!

The name comes from the Catalan verb escalivar, “to cook in ashes.” In fact, it was the way of cooking the vegetables that gave the name to the dish: vegetables prepared on the embers of a wood fire

It is a traditional dish of Catalan cuisine based on pork and / or veal bait fillets. It makes a stir-fry and is cooked to simmer with mushrooms, specially, “ceps”.

It is one of the few traditional Catalan dishes that owes its origin to the urban kitchen and not to the peasant.

The “Suquet de Peix”, or also known as “cruet de peix“, is a recipe of coastal origin.

It is cooked and served in a casserole and the ingredients are basically two: fish and potato. However, it is necessary to emphasize that the fish must always be of hard meat (grouper, golden, scorpionfish, monkfish …) and cooked over a sauce to which potatoes are added. Today, it is even very likely that the “Suquet” will add seafood.

One of the traditional Catalan desserts par excellence.

Certainly, it is a dessert very similar to the “Crème brûlée”, rich base of custard topped with a contrasting layer of hard candy. However, the Catalan cream is lighter. The cream is seasoned with lemon peel and a cinnamon stick. Exquisite!

Hostaliners begins your gastronomic tour through Barcelona and enjoy every.

Let yourself be surprised by Barcelona food specialities.

As we say in Catalonia when we sitting down to eat: BON PROFIT

Share your experiences with all Travelers using the Hashtag: