The Fiesta de Santa Eulalia, also known as the Winter Festival in Barcelona, is about to kick off. Get ready your agenda, the camera and some more belongings because you will not be quiet. The agenda in Barcelona is tight from 10 to 12 February. 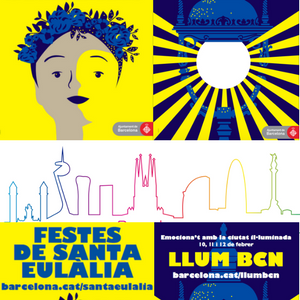 The festival is celebrated in honor of Santa Eulalia, copatron of the city of Barcelona along with the Mercè. Its legend counts as Eulalia, a youngChristian woman of 13 years , faced the consul Daciano to rebel against the unfair acts that were being carried out in the city of Barcelona at century IV by order of the Roman emperor Diocleciano.

Consequently by her rebellion, Eulalia was imprisoned and tortured thirteen times (what strange coincidence that is the same number as the age of the girl, or not?). Finally the punishments ended his life.

Since then, that girl has become a symbol of the struggle for the defense of justice and solidarity. Today  Barcelona still remembering her. Santa Eulàlia is related to solidarity and commitment to youth.

According to popular legend, when Eulalia ceased to be the patron saint of the city to be succeeded by the Merce, she was so sad that she could not stop crying. In the Festival de la Mercé it is usual to rain and, according to legend, rain is the tears of Santa Eulalia.

The motive is to pay tribute to Santa Eulalia, who had been patroness of the city until the eighteenth century for its relentless struggle for justice against the Roman Empire

In fact, the gothic Cathedral of Barcelona is erected in invocation to the Holy Cross and, of course, the Santa and martyr patron of the city, Santa Eulalia. It is right in the crypt of the Cathedral where there is the alabaster sarcophagus where the Santa rests. Worth to visit.

Despite having been so many centuries as our patron, proclaimed in the seventeenth century, it was not until the last century that her feasts were celebrated.

Curiously, the origin of the celebration of the day of Santa Eulalia in Barcelona is relatively recent. They have always been fickle parties that had been subject to liturgical acts and institutional celebrations until the 1980s.

It was in 1983 with the initiative of  giants of the district of Ciutat Vella .At 1985 with the support of the councilor of culture, the city decides to celebrate many activities of popular type.

3_ Note down the events held in Barcelona for Santa Eulalia

Parties full of popular culture, definitely for all ages and tastes. Celebrations that show and extol the conceptual symbolism of the martyr: Solidarity and commitment to young people. They are popular and traditional festivals, where the dances and festive events of the city are exalted. However, in recent years they have been renewed and adding more modern events that praise the beauty of urban heritage, such as the Festival LlumBCN.

If you want to feel like a real local, plan your trip in Barcelona to attend some of the most outstanding activities that we suggest.

festival LlumBCN  or LightBCN Fest: Oustanding Show . Throughout the 3 days light installations will transform and give life to streets, squares and buildings of the city of Barcelona. Created by schools and design professionals. From Friday 10 to Sunday 12 February. An unparalleled spectacle that makes the heart beat of the city’s heritage and, at the same time, its spectators.

Festival LlumBCN will leave you stupefied, do not miss it and organize your agenda,  there is much to see: